Finding a good vintage coping saw can be challenging. A few years ago Christopher Schwarz wrote about the Millers Falls No.42 coping saw on his blog. Shortly afterwards trying to get ahold of a No.42 became very challenging. I searched for a few years, and as luck would have it ended up with three saws last year. What’s interesting is that the three don’t look the same – for quite a while I thought one of them was missing a part of the adjustment mechanism – but things aren’t always what they seem. This required further investigation. Fig.1 shows the catalog entry from 1938. This version of the No.42 is the one most often seen, and sports the adjustment knob at the end of the saw, which wasn’t specified in the original patent. 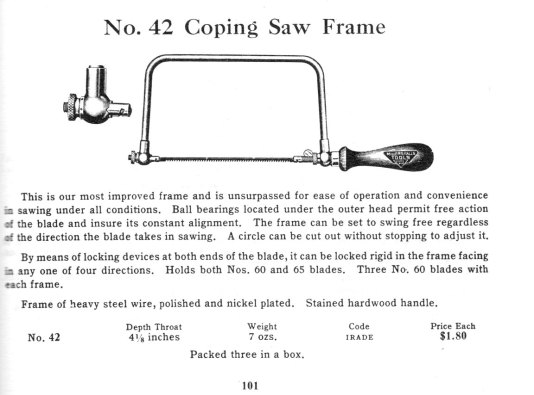 Note numbers in [ ] represent the associated part on the patent drawing in Fig.2.

Fig 3 illustrates the main components of the coping saw in addition to the two ends of the blade-holding mechanism. What is interesting about this coping saw is that the swivel head [22] has a series of notches in it, so that the blade can be locked in place. The inner draw bolt [17] contains a channel along which the key [20] containing a wing [21] moves when the nut [19] is rotated. This has the effect of locking the inner bolt relative to the metal socket attached to the handle [12].

The blade is tensioned by turning the handle, which pulls the threaded inner draw-bolt into the metal socket in the handle. The locking-nut is then turned towards the handle until the key engages in one of the notches. The metal insert in the handle contains both deep recesses and shallow notches. When the key engages a notch it is locked into the handle, but not the frame, allowing the blade to turn with the handle. Engaging a deeper recess allows the key to lock into one of the frames four V-shaped locking notches –  the blade now forms a rigid structure with the frame.

In the three No.42’s I have all the handles are different – over time the handles seem to have increased in size, and material used in their construction changed. The earliest model touted a Cocobola handle, whilst the later model has a cheaper red-stained Mahogany handle. 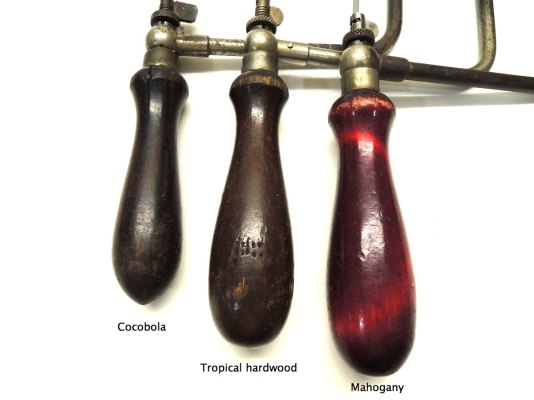 The last noticeable change is in the mechanism used to hold the blade in the draw-bolt. The 1908 patent uses an eyelet-type socket whereas the newer coping saws all have pin-type socket. This makes it more challenging to retrofit a pinned blade in the eyelet-socket – but not impossible. 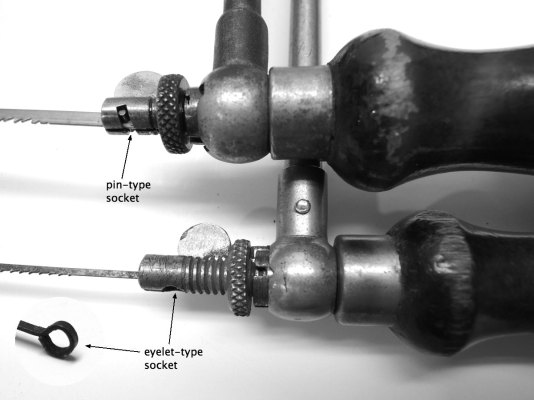 Two of the saw frames are slightly angled to accommodate a 6½” blade, the third (shown in Fig.3) only takes 6″ blades. I wasn’t able to find much of a timeline between the 1908 patent saw and the saw with the cheap mahogany handle – partially due to a lack of Millers Falls catalogs. The 1908 patent may have been adjusted to incorporate the outer adjustable draw-bolt somewhere around WW1. By the time WW2 had finished, the No.42 had disappeared from the catalog, in favour of the No.43/47, which were simpler from a construction standpoint, and likely cheaper to build. 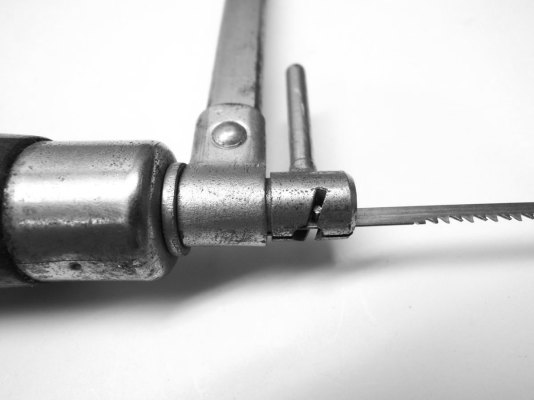 Below is an picture of the two types of sockets.  As blades with eyelet are next to impossible to find anymore, it is possible to retrofit modern pin-type blades to fit the older sockets. The new blade just needs the pin trimmed on either side, and likely the end of the blade as well. It’s not that hard to do with a Dremel.

Example showing a pin-type blade in a eyelet socket.

9 thoughts on “The Millers Falls No.42 coping saw”

This site uses Akismet to reduce spam. Learn how your comment data is processed.