Sometimes Lee Valley innovates in smaller ways. I like the whole array of miniature tools they make, but a recent tool which could actually be used is the Veritas Pocket Layout Square. Small enough for fine detail layout. or in tight spaces.

The square is made from a solid aluminum extrusion, which is anodized, and 1½” on side. The base is ½” wide, and 1/8″ thick, with a 1/8″ offset on one side, and ¼” on the other. The markings are laser etched on both sides.

The square has 1/16” rule graduations on the vertical edge, and angle graduations in 10° increments on the diagonal edge. Due to the small size, I imagine that these markings may not be as accurate as those on a protractor. The only concern I have is that it may be too small, and actually disappear in the wood shavings in the workshop!

If you are constructing something outdoors, typically the frame of a building, or foundation, sometimes you need to determine a straight vertical line. There are of course laser-like devices to do this, but I have found them to be somewhat finicky, and let’s face it, there is a simpler solution – the plumb bob. A plumb bob is nothing more than a weight at the end of a string. The weight is often pear-shaped, or shaped like a rocket, with the broad end uppermost, attached to a cord. They are usually made of lead, brass, or steel.

Traditionally they may have been made of stone, and used in both carpentry and masonry work. From them, a type of level was also developed used to set horizontal lines. Below is an illumination from the Hortus Deliciarum of Herrad von Landsberg, (1175-1185) showing a plumb bob and a square used at the construction of the tower of Babel.

Plumb bobs are also easy to use. Get a plumb bob, add a cord, and lower from the point you wish to determine is straight – it will always give a true line – with no batteries required! I have two steel and one brass bobs. The brass one is a Hercules brand, and has a replaceable steel point, and a detachable rear through which the cord is drawn and knotted. Super cool knurling over nearly the whole surface.

Millers Falls were late into the game of building planes, and this block plane, the No.1455 is a product of the 1950s. The No.1455 appeared in 1956 and disappeared in 1974, and was essentially a rebranding of the Millers Falls No.66 (itself the equivalent of a Stanley No.61). It is 6″ in length, has a blade width of 1-3/8″, and a blade angle of 12°. It has a non-adjustable throat, cam-lock cap, screw-type depth adjustment (with sled) and hardwood knob.

Early models featured a red cap and gray body, but by the late 1960s, the plane became black-enamelled, likely resulting in the addition of the “B” to the plane number. Marking on the box, and often in catalogs specify this as being 7″ in length, but it was a 6″ plane. This plane had no adjustments, except for a depth adjustment, although the holes in the blade to lock into the depth adjustment sled are oblong, implying lateral adjustment could be manually done (which is always a lot trickier).

Looking closely at the plane, you can see the cheaper machining which was characteristic of this later period of tool manufacture, when companies like Millers Falls and Stanley likely cared more about profit, than quality. The images below show some of the imperfections. The bed of the plane shows milling marks, as does the top of the base for the lever cap machine screw. It looks like the base was painted first, then milled. The side of the plane also has rough milling marks.

It is hard to determine the rationale for re-introducing a plane with a different number. For all intended purposes, the No.1455 is just a less expensive copy of the earlier No.66. The main differences on the No.66 is that the depth adjustment knob has cross-hatched knurling, and a Hand-y finger depressions on the side.

One of the best tools in my “toolkit” that I use around the house is my Picquic screwdriver. The one I bought originally from Atlas machinery is the STUBBY, which is the perfect screwdriver for tight places. I remember a similar screwdriver when I was a kid, it had a proprietary connection (no hex chuck), and the bits were stored in the handle. It seemed like a good idea, except that to figure out which bit you needed you almost had to open the back and tip them all out. As I recall it may even have been some sort of ratchet screwdriver. There is a long history of these multi-type tools, but likely one of the best comes from Canadian Company Picquic.

Picquic makes their products in Canada. In all they have 10 different screwdrivers, for all types of environments: Home use (SIXPAC Plus), tech and gadgets (Teeny Turner), hex-key (Hex-Calibre), and even a weatherproof one (Mariner). They aren’t expensive, and are super easy to use. The biggest innovation with these tools is that the bits are visible and easily accessible – easy to change and hard to loose. They come with 7 bits, six stored, and one in the chuck. To change a bit you use the existing bit to push through the bit needed – the old bit then is locked into place. There is no chance of loosing bits, or having them rattle about. The tools have a solid feel, and the bits for the larger tools are a good size (3″), and are built well. There are even replacements available should you accidentally lose one. For many of the drivers, bit sets are available in both US and Canadian (more square bits) combinations.

I recently bought a combination pack to expand my repertoire – containing the Teeny Turner, Multique, and SIXPAC Plus for C$30. They come with a bunch of different handle colours, which are nice and bright and stand out when you’re looking for them! For extra torque, the SIXPAC Plus has an aircraft alloy shank with a hex bolster that will receive a 7/16” wrench.

What are some tools for Christmas gifts? Here are twelve of my favourite tools of the year. Many are from Lee Valley, but hey, they do produce some good tools at different price points, and are available all over Canada (and the US).

With the gradual intrusion of the effects of climate change into our lives, people are coming up with interesting ways to reduce its affects. The reality is that some of the schemes are a not exactly well thought out. People need to start living more sustainably, and part of that is building sustainable houses. What does this really mean? It means the houses should be energy efficient, and built using as many renewable/low environmental impact products as possible. But it also means building smaller houses. You know, like the kind they use to build, before North Americans decided to binge on the size of houses?  Sure everyone wants bigger houses, or additions to houses, but few people stop to think about how they use the space in their homes properly. You don’t need super large bedrooms, just like you don’t really need multiple living areas, massive kitchens, or four bathrooms. Smaller houses are cheaper and easier to heat, cool, and maintain.

There was a time, before WW2 when house sizes were economical – we’re talking around 1000 ft². Consider the house below from the catalog of Scouton-Lee Co., 1927.

Here is the floor plan of the house with, two living areas, and a kitchen on the main floor, and three bedrooms on the second floor. Total space about 1000 ft², not including the basement. There are of course things that could be improved to 21st century standard: the kitchen could be enlarged, a second bathroom added in the basement, storage space (or another living space) in the attic. The house could be easily built from lumber, clad with lumber, insulated with rock-wool, and roofed with a metal roof. 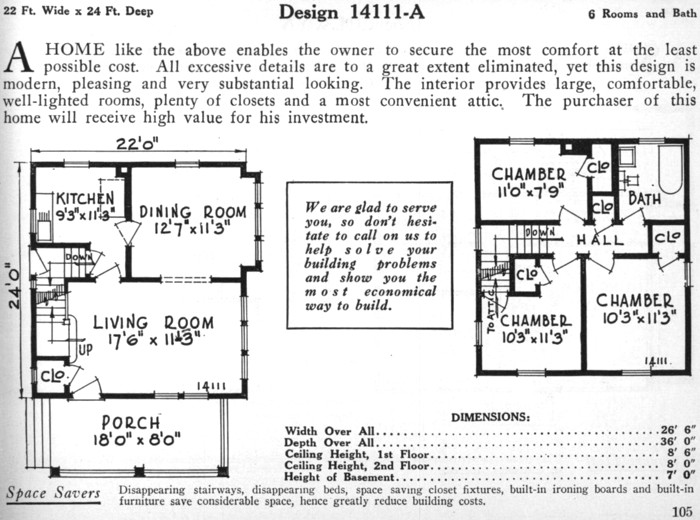 By reducing the footprint of houses, there would actually be more green space surrounding houses, which is better, especially from the perspective of water runoff, and of course potential for more trees. This house also has a large porch, a feature often overlooked in modern houses. What it doesn’t have is environmentally unfriendly things like stucco, and asphalt tiles. To reduce our impact on the environment we just have to learn to think differently, and think beyond what our wants are, thinking more about our needs and the needs of the community around us.

One tool manufacturer which appears a lot in the British vintage realm is Sorby. But which Sorby? This post will provide a bit of insight into the different Sorby’s. There are three principle tool companies with the name Sorby: “I. Sorby”, “John Sorby & Sons”, and “Robert Sorby & Sons”.

“I.SORBY” was the mark used by Isaac Sorby, established in 1810, and trading under his own name until circa 1814. The company is best known as a plane-iron maker, and the irons can be found on numerous independently manufactured wooden planes. The company then became Sorby, Turner & Skidmore, until 1825 when Skidmore dropped out, and the company continued as Sorby & Turner. In 1833 Isaac Sorby died, and Turner continued the business. In 1854 John Turner died, and his son Joseph Turner continued. In 1860 he took Joseph Naylor into partnership with him, and in 1871 Northern Tool Works was bought jointly by Taylor, Naylor, and William Marples (for his youngest son Charles). In 1875 the company traded under the name Turner, Naples, and Marples. The company changed names numerous times over the coming decades, and by 1909 it was a subsidiary of Marples ( in 1893 they were bought by Turner, Naylor and Co., which was in turn bought by Marples in 1909, however Turner, Naylor and Co. continued operations until 1963).

“I.SORBY” had a number of distinct trademarks. One, “Mr Punch” was added by Joseph Turner in 1859.

The company did manufacture its own planes.

This company existed in Sheffield and was established in 1797 by John Sorby (uncle of Robert Sorby). Its trademark was the “hanging sheep”, or Golden Fleece, registered by John Sorby in 1791.  The company was engaged in the manufacture of edge tools, saws, sheep shears, and files. However they were not plane makers, but rather manufacturers of plane irons. After his retirement, the business was taken over by sons John and Henry, hence the trademark “I & H SORBY” (I and J were not separate at the time). This company was acquired in 1845 by Lockwood Brothers (cutlery manufacturers).

The forbearers of Robert Sorby had been cutlers in the Sheffield region, dating from the mid 17th century. Robert Sorby and Sons were registered in Sheffield in 1828 as a manufacturer of edge tools, saws, scythes and hay knives. In addition to manufacturing tools, they also diversified into the manufacture of crucible steel for tool manufacture. From circa 1860-1967, the Sorby factory in Sheffield was known as the “Kangaroo Works”. The Kangaroo Brand of tools was made by Robert Sorby & Sons. During the 19th century, they had a large trade in Australasia. By the early 20th century, they were manufacturing carving tools, planes and plane irons, circular saws, wood saws, butchers saws and cleavers, garden tools, pruning knives, coopers’ knives, bricklayers tools and joiners tools. In 1923 Robert Sorby & Sons was bought by Sheffield company Hattersley and Davidson. They are today one of the few remaining British tool manufacturers.

working by hand
Create a free website or blog at WordPress.com.