German chisels are somewhat rarer in north America than their Swedish cousins. But they do exist. Sometimes the hardest thing is finding information about the company that manufactured them. Take for example, the set of 8 HOPPE chisels I bought a while back. They were not expensive ($50?), and the steel seems quite good. 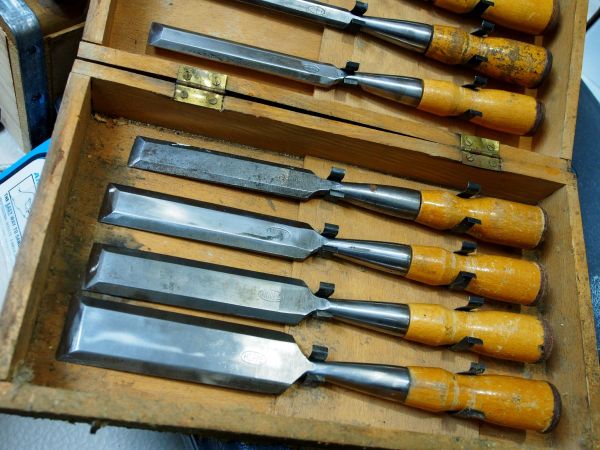 There are two markings, as shown below. The first identifies the brand as HOPPE on the top of the blade, the second (on the back) that it is manufactured in Germany. As they are not marked “West Germany”, I would guess they were manufactured before 1949. But in reality, I have been unable to find much information about this manufacturer.

The chisels are socket chisels,  9½-10″ in length with a ratio of steel:handle of of 2:1, i.e. their handles are very small, and as shown in the photo below, tends to fit completely into my hand. 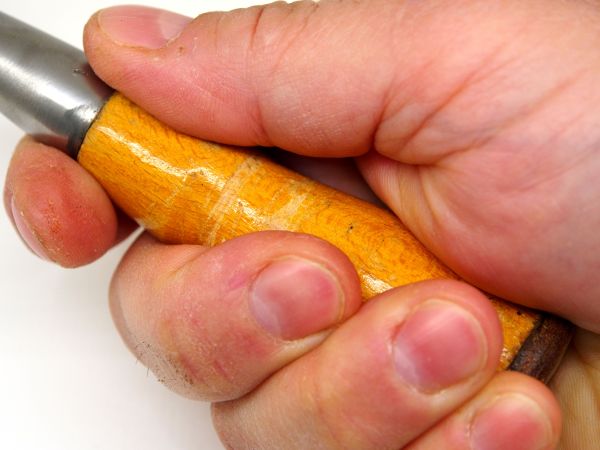 The ends of the chisels are capped in leather.

There is a good resource on European chisels, Alte Beitel.

Vintage chisels from Sweden are usually quite exceptional due in part to Swedish steel. Some of the most common Swedish chisels found in North America are those manufactured by Erik Anton Berg (E.A.Berg) manufacturing company, founded in the town of Eskilstuna. The company was founded in 1880, and made straight razors. In 1896 a catalog shows the introduction of woodworking tools such as chisels, knives and plane irons. Eventually the company was bought by Sandvik. In the 1950’s the chisels were being cold in the U.S. under the “Shark Brand” by Sandvik Saw & Tool. They were advertised as being “genuine Swedish charcoal steel hardened and tempered”. The company was sold in the late 1950s to Swedish company Bahco, and which was itself bought by Sandvik in 1991. Eskilstuna was the home to a number of tool manufacturers. Unfortunately little can be found in English relating to the historical Swedish tool industry.

Here is an example of the label usually found on a E.A.Berg chisel. When the company first started, the logo was apparently a Wels catfish, although it later changed to the ubiquitous shark shown below. 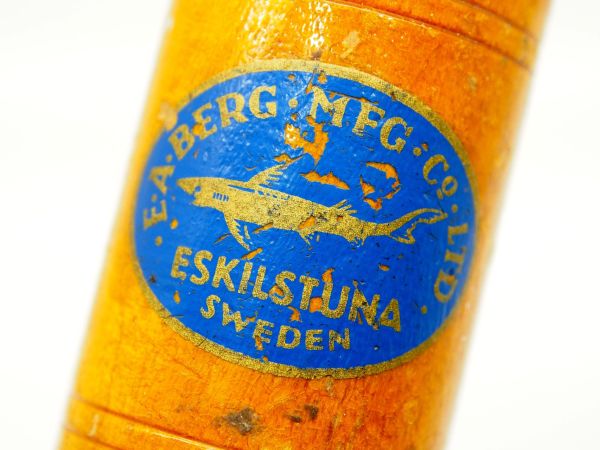 An example of the blade markings of an E.A.Berg chisel (left), and that of another manufacturer from Eskilstuna – EskilstunaSteel.

A comparison of various E. A. Berg logos can be found on Kim Malmberg’s Flickr site. Compared side-by-side the chisels look very similar. They both have brass ferrules, although that of E.A. Berg has more refined offset knurlings, versus the vertical knurlings of the EskilstunaSteel chisel. 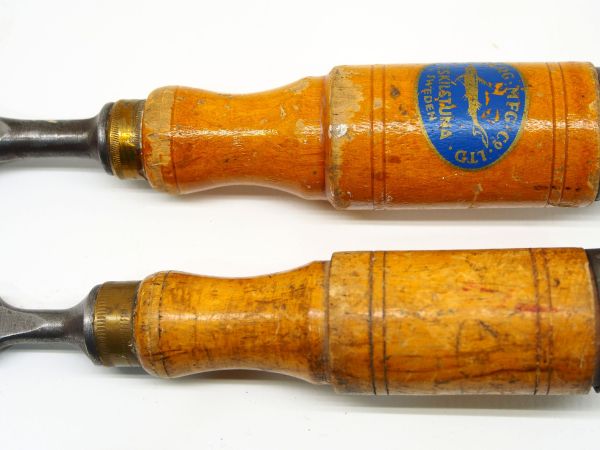 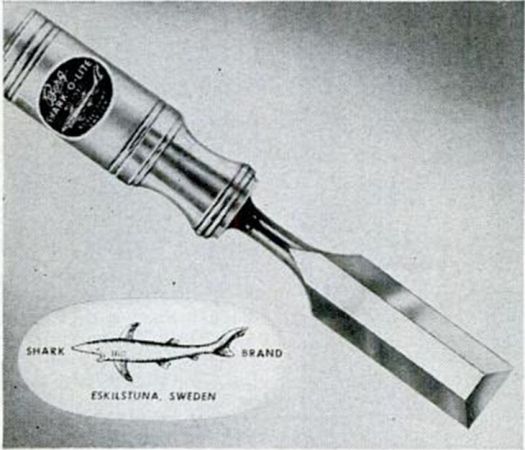 A good progressive study of E.A. Berg plane irons can be found here.

The problem with renovating old houses is that you can’t just spend money on superficial things. Aesthetics are nice, but the structural blanket of the house matters as well. A lot. I have been working on my house for a l*o*n*g time. It seems to be never ending, but the main structure of this 90 year old house seems to be in good shape now. It is often the simple things – electrical, plumbing, and roofs that cause the most angst, and people in general and loath to spend money on these things, because nobody can see them.

So what does it mean?

In Toronto, many of the older houses have clay sewer pipes, which hook into cast-iron piping 1-2 feet from the cast iron stack. Unlike the Romans, who also used clay pipes, Canada has cold winters, so no one can expect clay pipes to last forever. That and the ability of tree roots to infiltrate and destroy clay pipes, means that eventually they need to be replaced. Old clay sewer systems often had the “bend” in the pipe to stop sewer gases, typically a “U” bend, located just outside the front of the house. Tell-tale signs of problems are when the clay “U” bend collapses. Modern houses have “U”, or “J” bends at each juncture of a drain, which allows waste to flow unimpeded to the sewer. That and after 70+ years, the cast iron pipe joint to the clay line has also probably rusted away. This normally requires replacing all the clay pipes, and the stack base with PVC pipe, from the city line, all the way through to the weeping-tile. At the front wall of the house, a back-flow prevention valve should be installed, and at least one floor drain somewhere in the basement. Excavating the old clay pipes might result in the discovery of “branch” lines. These were sometimes connected to roof downspouts, and have often been disconnected externally, and filled in (and if not they should be). Which leaves the cast-iron stack itself. Should you just replace it too? Well, you could, but a good portion of it above ground might still be in good condition. Cast iron is super quiet, that’s why its still used in high-rise buildings. PVC piping is uber noisy.

If your house has wiring that runs through ceramic insulators such as this: 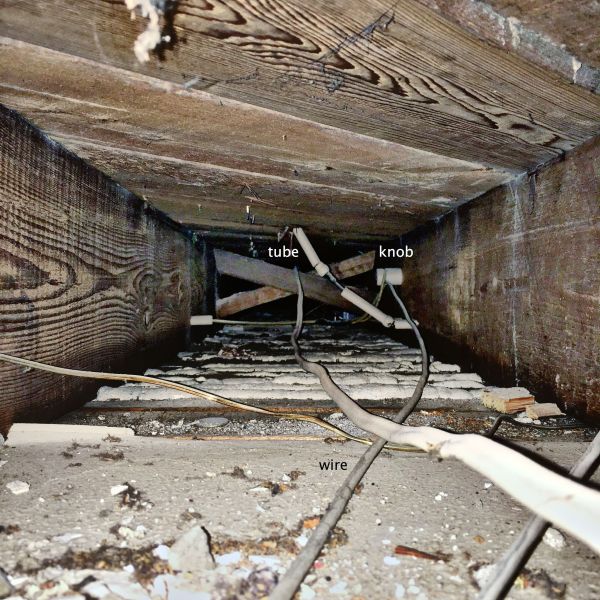 Then you need to have the wiring changed – simple as that. The knob-and-tube in this image is actually dead, and it is not uncommon to see pieces of it in dead spaces such as ceilings, where it is too hard to remove (this is my living room ceiling, which is one of the few lathe-and-plaster ceilings left in my house). A disassembled ceramic “knob” is shown below. The wire sits in the grooves of the lower half, and is covered by the smaller cap with the circular grooves. The entire assembly is then held in place using a screw.

Look, replacing infrastructure isn’t as cool as installing a 6-burner stainless-steel industrial stove, but it is necessary.