Some of the more interesting ideas in tool innovations require delving into patents from the past. And mostly that happens by accident. A 1928 Swiss patent (No.128789) describes a wooden plane which uses a sole made of Hirnholz, or end-grain. In an English-style wooden plane, the plane body is generally made of the same type of wood. In Germanic-style wooden planes, the sole of the plane is often made of a harder wood. For example, some planes have a body made of European red beech, and a sole made of hornbeam.

In the 1930s, a brand named “HISO” (“HIrnholzSOhle”) appeared, with near vertically oriented grain (from company Badenia). The challenge with this idea would probably be  joining the sole to the plane body, given that gluing end-grain is not exactly trivial. The solution of course is to employ the bi-directional finger-joint which is so common in plane construction in Germany. This essentially increases the face-grain gluing surfaces.

In April I picked up a copy of “The Woodworker: The Charles H. Hayward Years“, published by Lost Art Press. EXCEPTIONAL, is the only way to describe the two-volume set. I have a few of Hayward’s books, e.g. Woodwork Joints, and it is an astonishing work of art. The drawings are finely detailed and simple, the sort of work that is rarely seen today. There may be no better reference to the art of woodworking, the drawings help to bring woodworking to life. 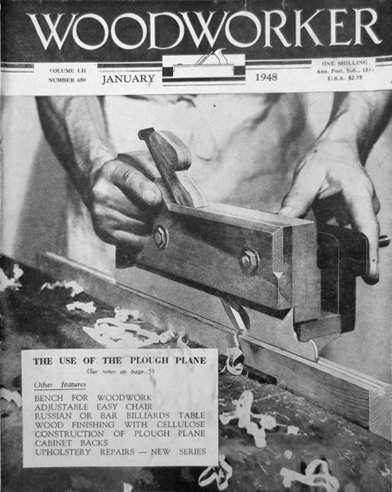 Volume I is on Tools, Volume II is on Technique. There is no doubt that these two volumes fill a void – condensing years of woodworking knowledge is not an easy task, surely made harder when the knowledge is in magazine format. Magazines like this don’t exist anymore. these volumes pay respect to people who have inspired a generation of woodworkers.

Obviously a lot of thought went into publishing these two volumes, and it is greatly appreciated. Collecting these magazines would be extremely challenging, and even in a digital world, it is unlikely digital versions of these older magazines would ever surface. Regardless of which, digital books and magazines just don’t have the same appeal as paper. The third volume, “Joinery”, will be available in December, with the last volume, “The Woodworker”,  to come in 2017.

These books are truly inspirational.

Once upon a time, companies like Stanley sold tool sets in the form of “tool cabinets” containing everything needed for the woodworking shop. Then they stopped. It is hard to understand exactly why. The rise of powertools?

Here is a toolkit offered by German company Ulmia in the 1930s.

Ironically, Ulmia still offers a series of tool cabinets, with a similar assortment of tools. The saws have been replaced by a single Japanese Dozuki saw, and there no longer seems to be a drill brace, but other than that, they are very similar. Emmerich also offers a cabinet: 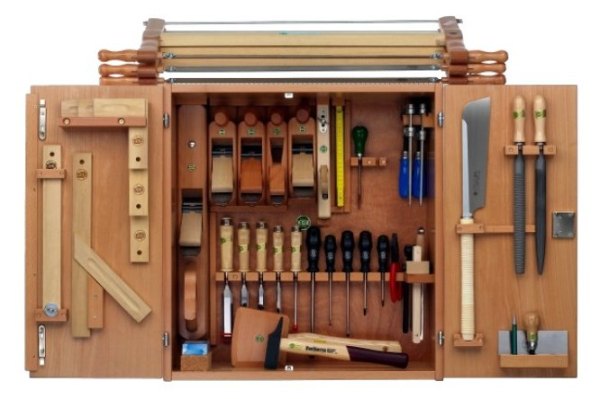 But no such sets exist in North America – why? Cost? Lack of interest? Or do we tend to buy more of our tools piece-by-piece? Maybe the lack of bespoke toolmakers in Europe makes tool sets more popular?

While the use of wooden planes declined in North America, the same could not be said elsewhere. In the great bastion of plane-making, England, the preference was more for an amalgam of wood and steel: the infill plane. Not that the idea was anything new. Turn back the clock 2000 years to the times of the Romans, and one will find metal planes with a wooden core. So whilst North America surged ahead with the notion of completed metal planes (apart from the handles), across the Atlantic, infill planes evolved. These planes pre-date those in the the America’s likely appearing in the late 1700’s, as high-end mitre planes. The method of construction involved joining plates of iron using dovetails to form a “box”, which would be filled with wood held in place by screws or pins. These mitre planes may have been the fore-bearers of the block plane, being used to shear end-grain fibres. The method of construction differentiated these planes from their cross-ocean brethren, as casting was still in its infancy.

Apart from North America, and the U.K., metal planes did not largely impact wooden plane makers on mainland Europe, or Asian countries like Japan, where wooden plane manufacturing is still alive. It is hard to understand why metal planes did not take off in Europe as they did eventually across the channel. Tradition? In the Germanic countries there has always been a long tradition in the use of wooden planes. In Germany, where horned wooden planes are king,  there are companies like E. C. Emmerich, and Ulmia which today still manufacture a large number of wooden planes. In France, there were tool companies like Goldenberg. The Japanese also continue to produce simple wooden planes that work exceptionally well. Recently, wooden planes have made a comeback in North America through the likes of bespoke makers like J Wilding.

The second reason the use of wooden planes declined is the introduction of metal planes. On August 24, 1827, a patent was assigned to Hazard Knowles of Colchester, Connecticut, for “Plane stocks of cast iron“. This is the earliest known patent, but of course this doesn’t preclude other metal planes having been invented at an earlier time.

This one patent in itself did not lead to an overnight demise of wooden planes, but it did contribute to an evolution of metal plane patents. (There is a possibility that there were more patents related to iron planes, but an 1836 fire in the Patent Office, resulted in only 2,845 patents being saved – all patents with an X are pre-1836).

Some of the benefits of metal planes over their wooden brethren was the fact that cast iron provided a more wear resistant sole than wood, but even more important were the improvements in the alignment and adjustment of blades. It is much more difficult to maintain consistency using a wooden wedge to hold the iron in a wooden plane. A patent by William S. Loughborough in 1854, furthered the cause. This patent (No.10,748) described a means of fastening the blade on a metal plane, touting the benefit of being able to easily adjust the throat opening. 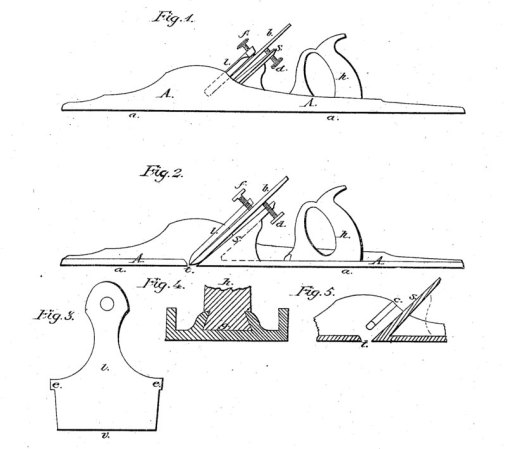 The patent of 1859 (No.23,928) was for an improved bench plane (actually looks more like a skew-smoother), and described the idea of a screw to maintain the lever cap, and an adjustable parallel fence. The Loughborough was manufactured by George and John Telford. Their ad (1867) below shows plow, filister, and smoother planes.

Telford did not survive beyond the late 1860s. The Metallic Plane Co. of Auburn NY, manufactured places from 1867-1880. In an advertisement for PERFECT METAL PLANES, by E.G. Storke in 1870, the virtues of the metal plane were extolled.

“Perfect Metal Planes
Have long been sought, and are at length made, and prove a great BOON to WOOD-WORKERS. They are light, CHEAP, and durable. Work very EASILY and PERFECTLY on hard, soft or eaty timber, or on end-wood, and are very convenient. The CUTTING IRONS, now generally so poor, are, by us, all WARRANTED SUPER-EXCELLENT, TRY THEM.”

None of these small companies lasted long, but that was probably due to an inability to advertise the benefits of their product, rather than a deficient product. It was to take the larger companies like Sargent and Stanley to usher in the age of the metal plane.

Check out these polissoir’s from Granville Island Broom Company, in Vancouver, B.C. I have a couple of their brooms, and they are great! For those who don’t know, a polissoir (pronounced as poly-swaar) is a bundle of broom corn that is used to burnish a wooden surface to produce a tactile, low-lustre finish.

The decline of the wooden plane in North America began around the 1850s, and was partially due to an expansion of the population, and in urban regions, resulting in increased demands for processed lumber. Machines were developed to replace some of the more time-consuming manual methods of processing lumber – sawing, moulding, and floor board planing. Imagine a floor board cut using vertical sawmill, e.g. muley saw, with a width anywhere from 12-16″, and a length way beyond 12 feet. The resulting rough side used as the top of the floor  would have to be planed by hand. The sides would have to be hand planed to form a rabbet joint, allowing for a “ship-lap” joint between floor boards. The introduction of the Woodworth Planing Machine (developed by WIlliam Woodworth, Poughkeepsie, NY)  in the 1820s revolutionized the processing of lumber for floors, and mouldings. This planing machine evolved into a series of forms, each adapted to a particular product.

Of course, more machinery meant less demand for wooden hand planes. Yet, machinery was not the only harbinger of the wooden plane’s demise. There was also the rise of metal planes.

working by hand
Create a free website or blog at WordPress.com.